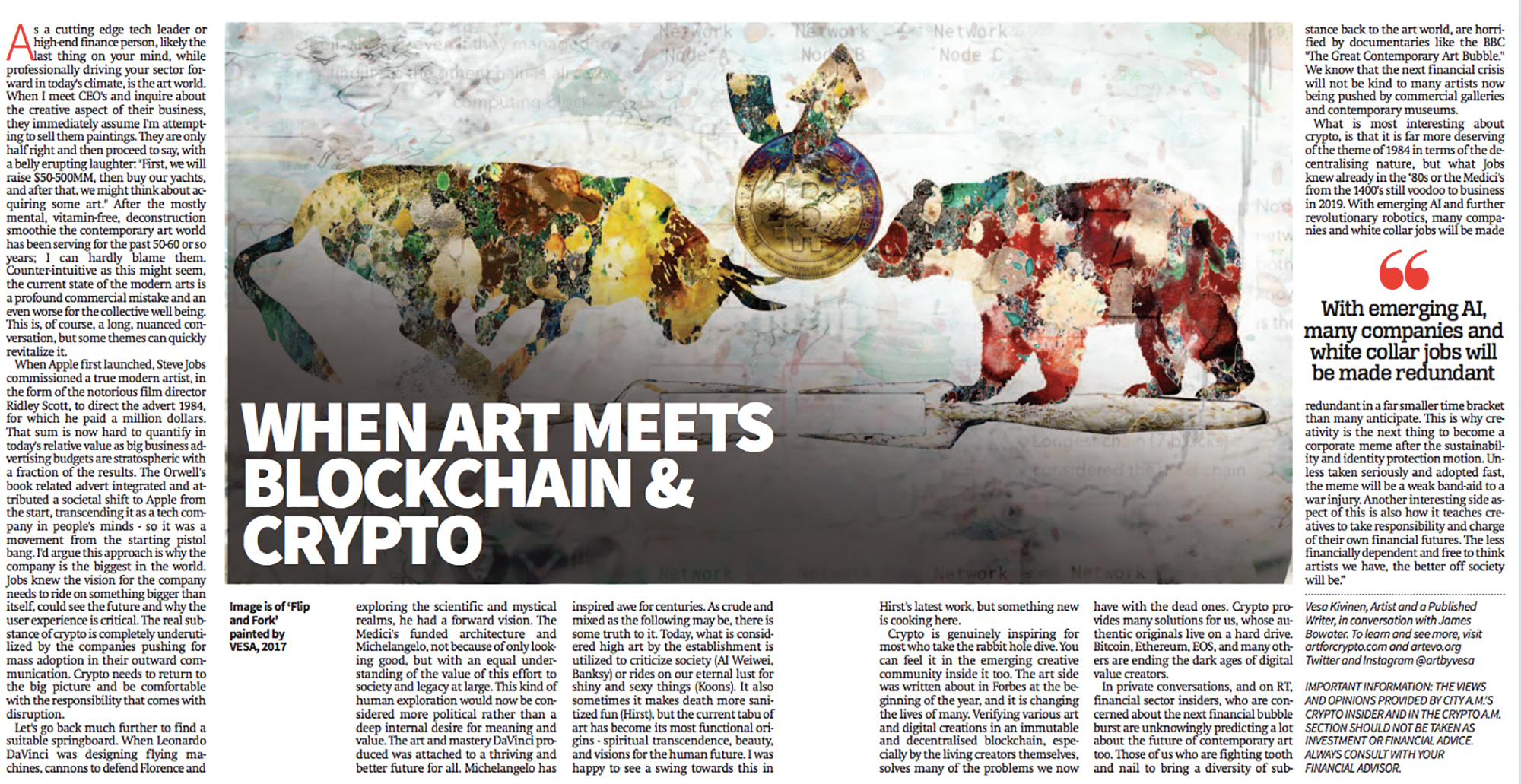 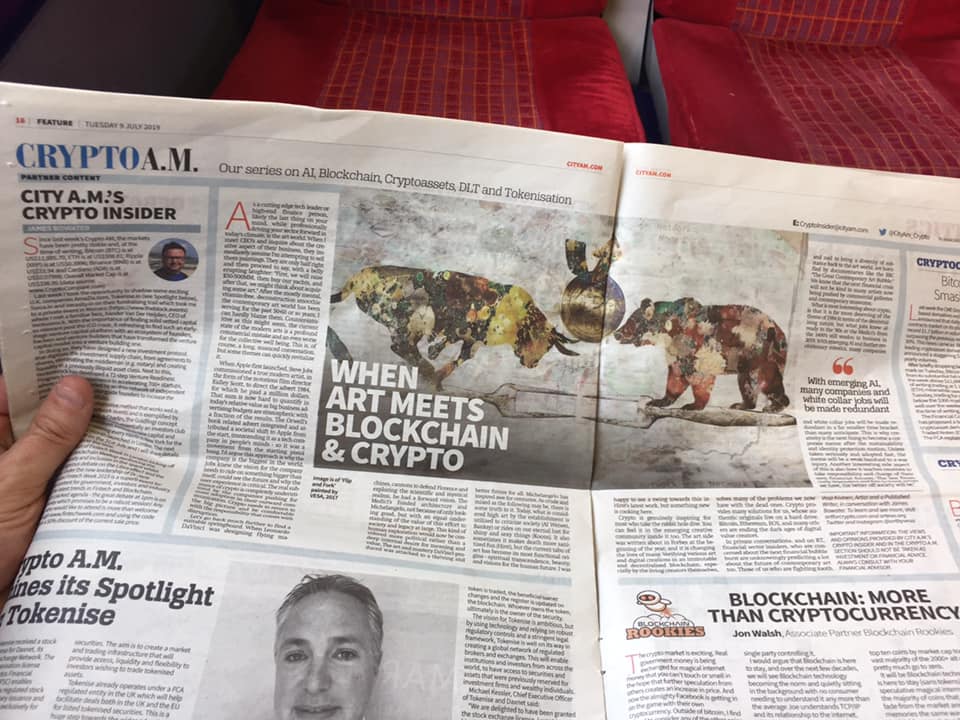 This is a decentralized part of the whole manifesto regarding the blockchain movement. It was originally published on City A.M's crypto spread Tuesday 9th July and handed freely to the people of London, UK.

This is 1/12 verified on the blockchain and sold only with cryptocurrency.

As a cutting edge tech leader or
high-end finance person, likely
the last thing on your mind, while
professionally driving your sector forward in today's climate, is the art world.
When I meet CEO's and inquire about
the creative aspect of their business,
they immediately assume I'm attempting to sell the paintings. They are only
half right and then proceed to say, with
a belly erupting laughter: "First, we will
raise $50-500MM, then buy our yachts,
and after that,we might think about acquiring some art." After the mostly
mental, vitamin-free, deconstruction
smoothie the contemporary art world
has been serving for the past 50-60 or so
years; I can hardly blame them.
Counter-intuitive as this might seem,
the current state of the modern arts is
a profound commercial mistake and an
even worse for the collective well being.
This is, of course, a long, nuanced conversation, but some themes can quickly
revitalize it.
When Apple first launched, Steve Jobs
commissioned a true modern artist, in
the form of the notorious film director
Ridley Scott, to direct the advert 1984,
for which he paid a million dollars.
That sum is now hard to quantify in
today's relative value as big business advertising budgets are stratospheric with a fraction of the results. The Orwell's
book-related advert integrated and attributed a societal shift to Apple from
the start, transcending it as a tech company in people's minds - so it was a
movement from the starting pistol
bang.I'd argue this approach is why the
company is the biggest in the world.
Jobs knew the vision for the company
needs to ride on something bigger than
itself, could see the future and why the
user experience is critical. The real substance of crypto is completely underutilized by the companies pushing for mass adoption in their outward communication. Crypto needs to return to the big picture and be comfortable
with the responsibility that comes with
disruption.
Let's go back much further to find a
suitable springboard. When Leonardo
DaVinci was designing flying machines, cannons to defend Florence and
exploring the scientific and mystical
realms, he had a forward vision. The
Medici's funded architecture and
Michelangelo, not because of only looking good, but with an equal understanding of the value of this effort to
society and legacy at large. This kind of
human exploration would now be considered more political rather than a
deep internal desire for meaning and
value. The art and mastery DaVinci produced was attached to a thriving and
better future for all. Michelangelo has
inspired awe for centuries. As crude and
mixed as the following may be, there is
some truth to it. Today, what is considered high art by the establishment is
utilized to criticize society (AI Weiwei,
Banksy) or rides on our eternal lust for
shiny and sexy things (Koons). It also
sometimes it makes death more sanitized fun(Hirst), but the current tabu of
art has become its most functional origins - spiritual transcendence, beauty,
and visions for the human future. I was
happy to see a swing towards this in Hirst's latest work, but something new
is cooking here.
Crypto is genuinely inspiring for
most who take the rabbit hole dive. You
can feel it in the emerging creative
community inside it too. The art side
was written about in Forbes at the beginning of the year, and it is changing
the lives of many. Verifying various art
and digital creations in an immutable
and decentralized blockchain, especially by the living creators themselves,
solves many of the problems we now
have with the dead ones. Crypto provides many solutions for us, whose authentic originals live on a hard drive.
Bitcoin, Ethereum, EOS, and many others are ending the dark ages of digital
value creators.
In private conversations, and on RT,
financial sector insiders, who are concerned about the next financial bubble burst are unknowingly predicting a lot
about the future of contemporary art
too. Those of us who are fighting tooth
and nail to bring a diversity of substance back to the art world, are horrified by documentaries like the BBC
"The Great Contemporary Art Bubble."
We know that the next financial crisis
will not be kind to many artists now
being pushed by commercial galleries
and contemporary museums.
What is most interesting about
crypto is that it is far more deserving
of the theme of 1984 in terms of the decentralizing nature, but what Jobs
knew already in the ‘80s or the Medici's
from the 1400's still voodoo to business
in 2019. With emerging AI and further
revolutionary robotics, many companies, and white-collar jobs will be made
redundant in a far smaller time bracket
than many anticipate. This is why creativity is the next thing to become a
corporate meme after the sustainability and identity protection motion. Unless taken seriously and adopted fast,
the meme will be a weak band-aid to a
war injury. Another interesting side aspect of this is also how it teaches creatives to take responsibility and charge
of their own financial futures. The less
financially dependent and free to think
artists we have, the better off society
will be.”
Vesa Kivinen,
Edited On-Chain By V E S A
Created On-Chain By V E S A