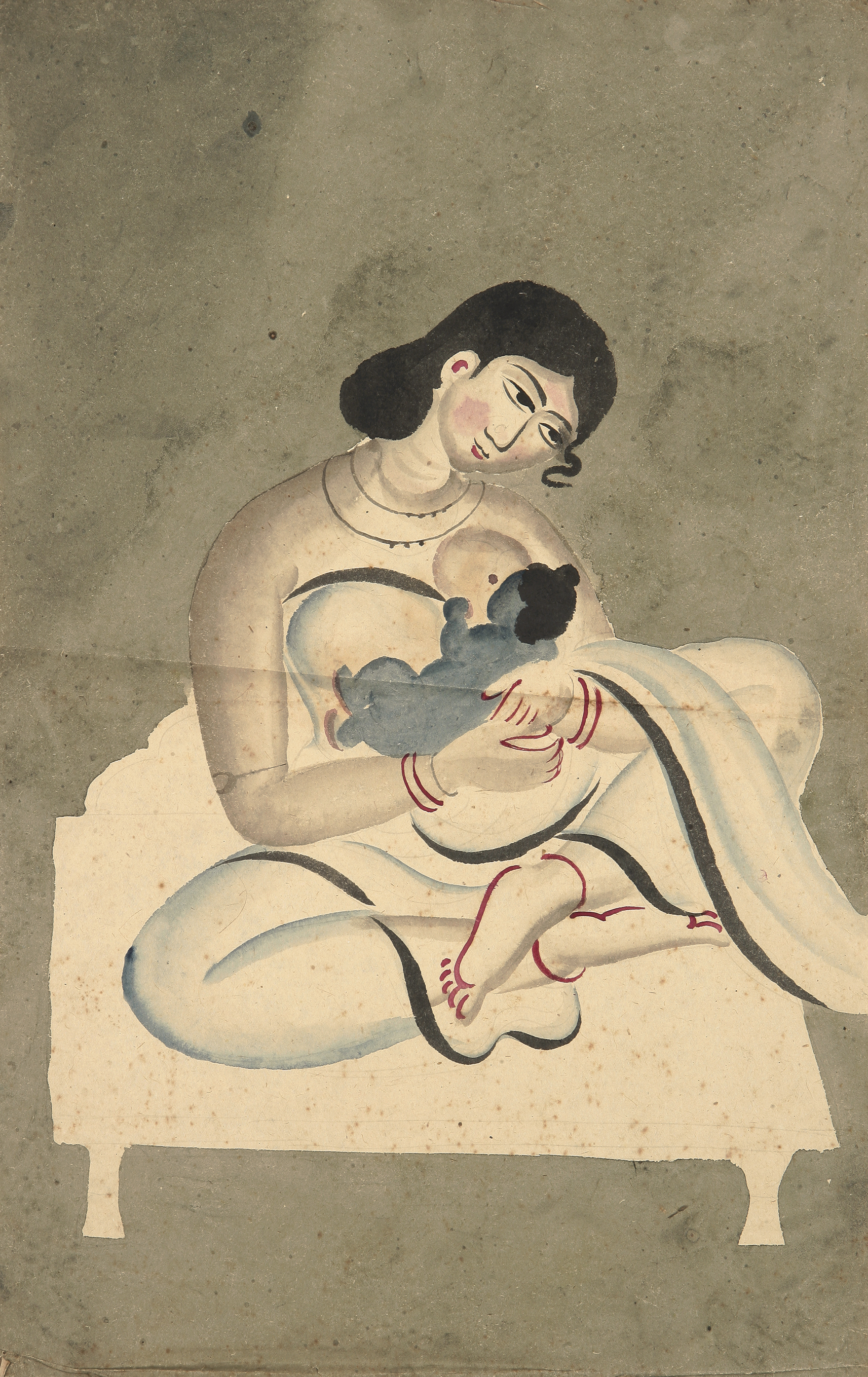 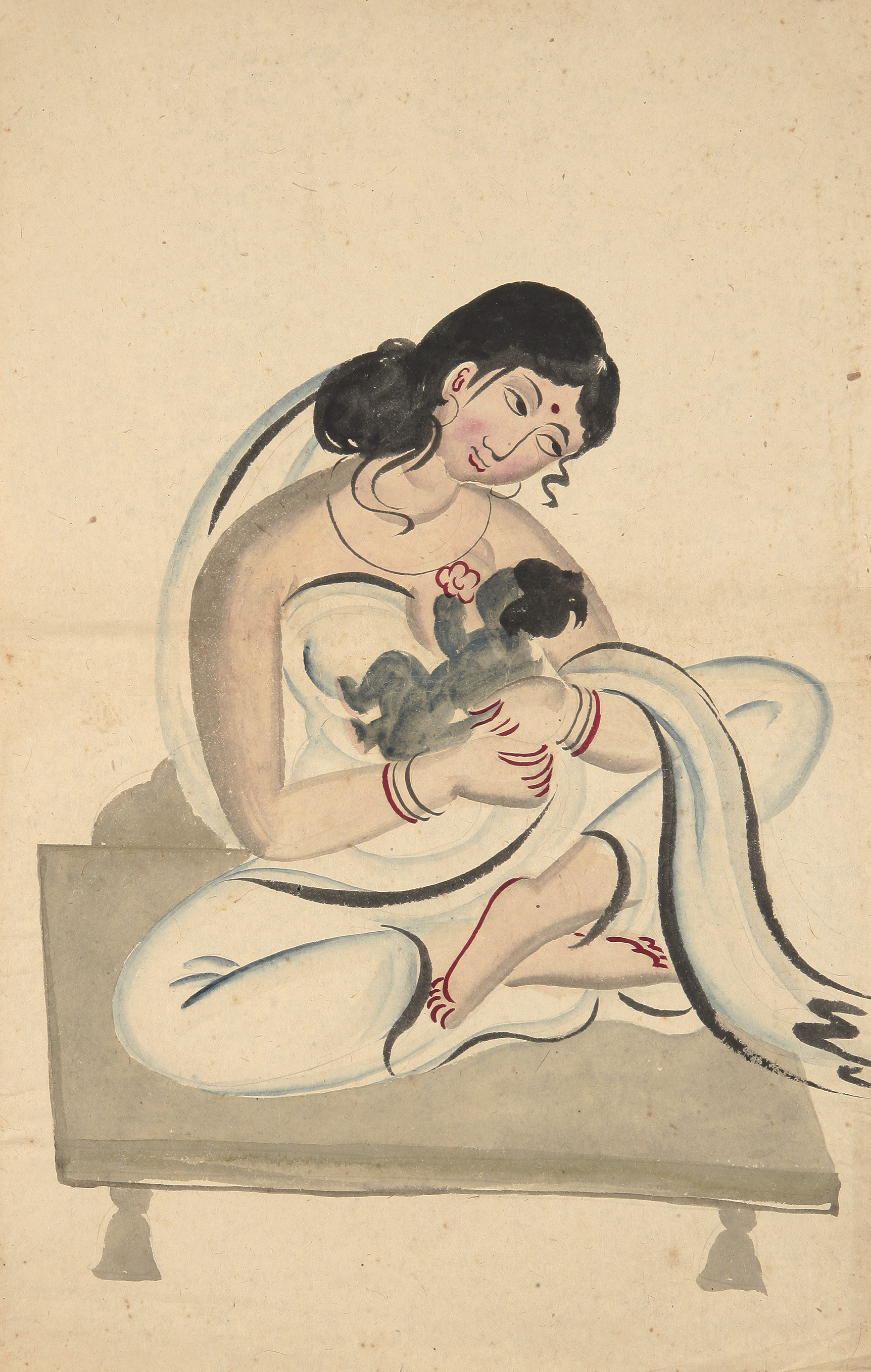 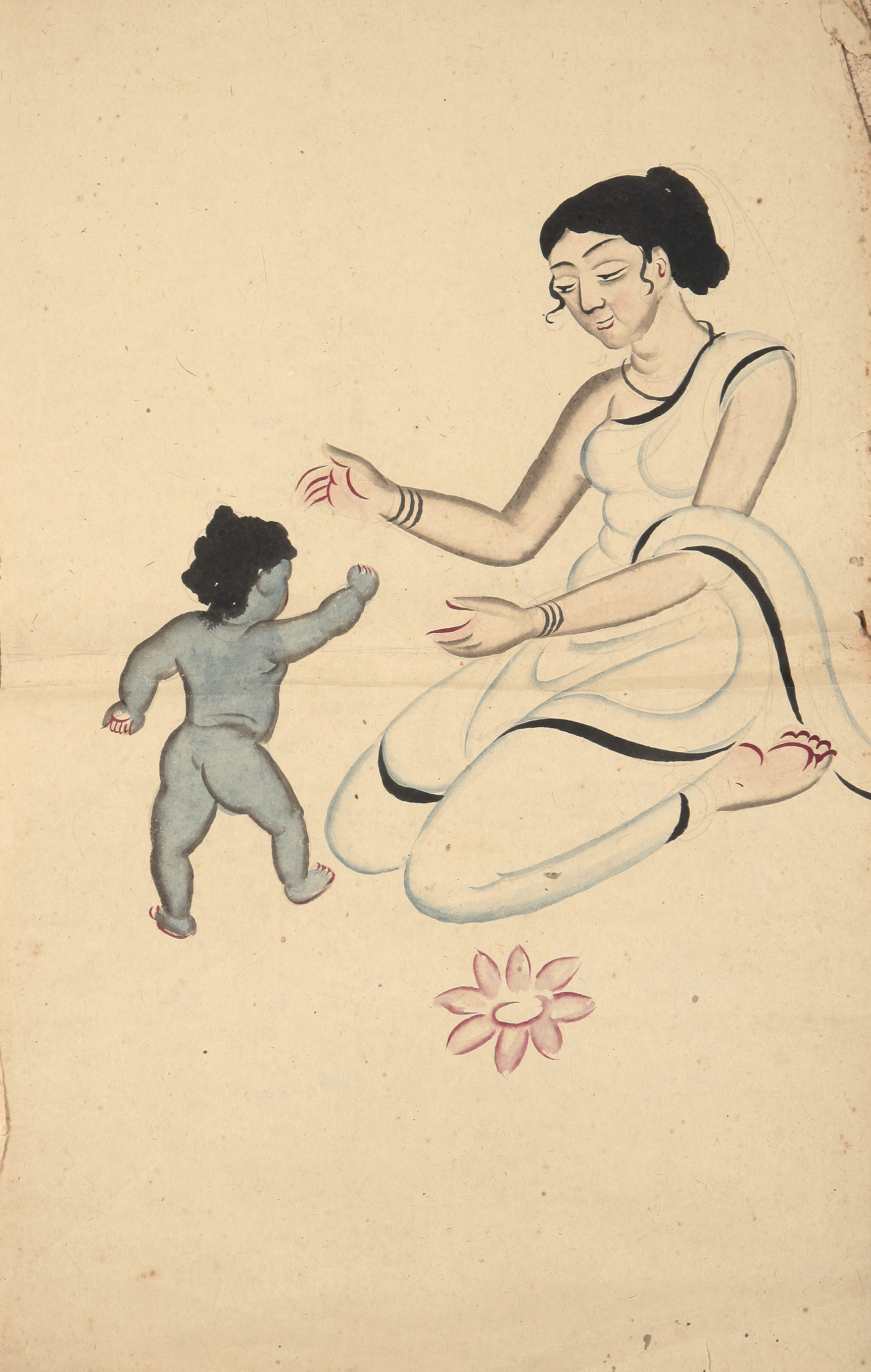 'There is an exquisite freshness and spontaneity of conception and execution in these old brush drawings. They are not drawn with the meticulous perfection that gives such distinction to Mughal portraiture. They have not the studied elegance and striving-after effect of the charmingly sensitive later drawings of the Kangra School  But there is a boldness and vigour in the brush lines that may be compared to Chinese calligraphy. (Ajit Ghose, 'Old Bengal Paintings', Rupam 27 - 28, Calcutta, July - October 1926, p. 98)


During the 18th century Kolkata rapidly expanded to become the capital of British India. The city became the largest commercial centre in India and artisans from the surrounding areas flocked to the city in search of new patrons. One such group of artists were the patuas or scroll painters of Bengal who developed a new hybrid style of painting that is now known as the Kalighat School. It was so named because initially most of the artists producing paintings in this style, worked near to the ghat or landing place next to the popular shrine dedicated to Kali, situated on the outskirts of the city.


The rapid expansion of the city encouraged the Kalighat artists to adapt their traditional techniques of scroll painting to cater to a new urban audience. The artists simplified their production methods so that they could produce a comparatively large number of paintings quickly and cheaply, which they could sell to the pilgrims that visited the nearby shrine.


Unlike scroll paintings, Kalighat paintings were not produced on cloth, but rather cheap locally manufactured paper, and their compositions usually only depicted a single scene rather than a whole narrative sequence. The artists rejected gouache and tempera in favour of watercolour, which they could apply to the paper quickly in fluid lines with a broad brush. The style was minimalist and included little or no background details, but the range of subjects depicted became increasingly diverse.


Although Indian pilgrims were the principal patrons of the Kalighat School, Europeans also began to collect these paintings as souvenirs when they visited the shrines. William Archer, one of the first art historians to write about the Kalighat School, noted that the minimalist style could be seen as an important forerunner to some modern movements in the West. He particularly felt that the bold tubular forms of Fernand Leger showed a great affinity to the Kalighat style. In his book Kalighat Paintings, Archer comments that the Kalighat paintings seemingly antedated some of the more audacious inventions in the modern epoch. (W. G. Archer, Kalighat Paintings, London, 1971)


The influence of the Kalighat style on the Bengali artist Jamini Roy is equally well documented, and the soft curvilinear lines of the Kalighat paintings are characteristic of a transitional period in his career when the artist moved away from an expressionistic style, towards a more traditional folk idiom. The swooping lines and minimalist treatment of lot 221 by Jamini Roy in the current catalogue certainly bears close comparison to the treatment of the female figures in the current lot.


Interestingly, however, the influence of the Kalighat style on other Bengali artists is less frequently discussed and so it is important to appreciate that these three paintings formed part of the personal collection of Nandalal Bose. Sugata Bose notes Nandalal had briefly painted patas in the Kalighat style before he traveled to Ajanta, and once he saw the murals there he discerned a kinship between the Kalighat and Ajanta styles. He felt that the contemporary Kalighat style had a similar relationship to the classical Ajanta style as the art of the turn-of-the-century Tagore school did to Mughal and Persian painting. (Sugata Bose, A Painters Worldview: the Vision of Nandalal Bose, 2008, www.siliconeer.com) Considering the artists interest in all forms of art, especially Indian art, it is not too surprising to find locally produced paintings within the artists collection, but their very presence within the collection does raise questions about the influence of their minimalist style on his own paintings, and whether these paintings could potentially even be the work of Nandalal Bose himself experimenting in a local style. The elegant curves of the standing figure of the child on the following page and the overall treatment of the composition makes it tempting to suggest that in this work we may see the hand of the master himself.
Created By Pundoles