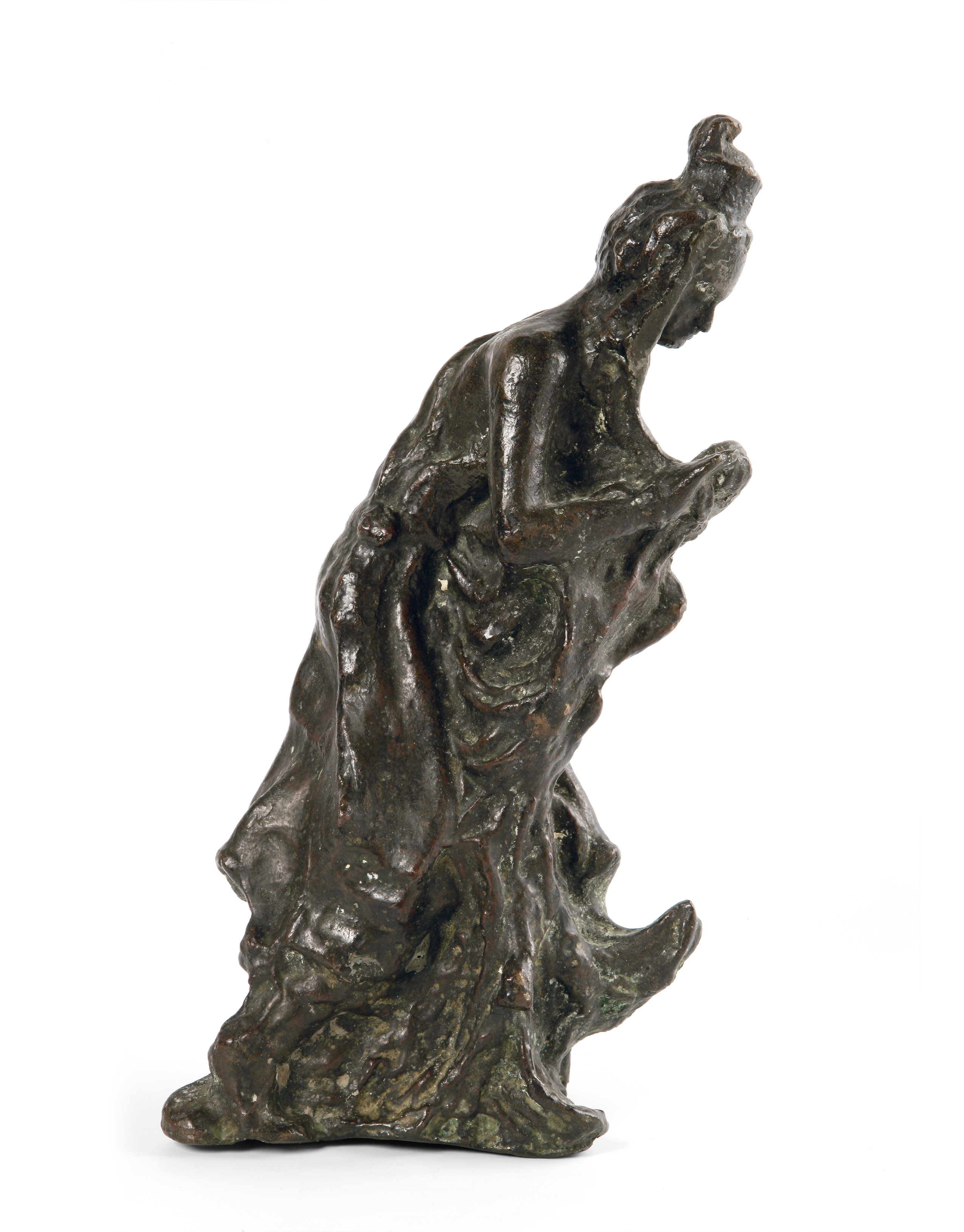 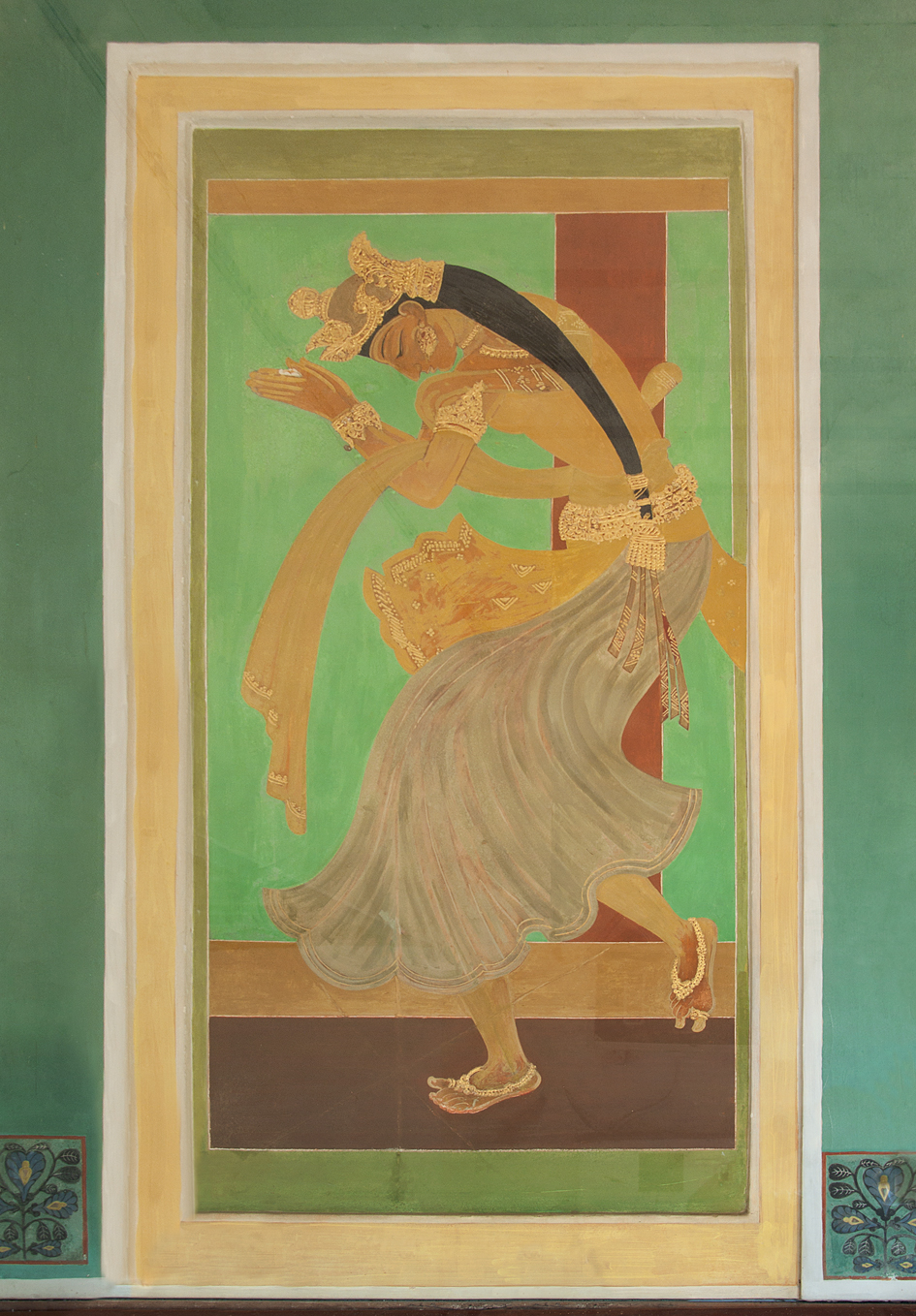 This bronze is a unique work cast during the artists' lifetime

From the collection of the artist
Thence by descent

The 2008 cast of this bronze was sold at Christies New York, The Art of Nandalal Bose, Abanindranath Tagore, Rabindranath Tagore, the Collection of Supratik Bose, 17 September, 2013, lot 43.

As that autumn day ends, maiden 'Srimati' by name

Flowers and lamp on a plate

to bow down, to queen mother silently to her she came.

(The opening stanza to the 1899 poem Pujarini by Rabindranath Tagore)


The composition of this bronze is inspired by the last dance of Srimati, the central character in Rabindranath Tagores play Natir Puja. This subject held particular interest for Nandalal as his eldest daughter Gouri performed the lead role in the 1926 production. Her role as Srimati created a sensation in Bengali society, as it was the first time a woman with some social standing was performing in the theatre (these roles were normally reserved for women of lower caste). Elsewhere, Bose explored the theme of Natir Puja through his drawings, paintings and etchings. The figure of the dancer in a similar pose to the current bronze also forms part of the mural on the lower verandah of the Old Library in Santiniketan (shown in photo). For a preparatory drawing of the mural, see Pundoles, The Fine and Decorative Arts Sale, 3rd September 2013, lot 48.


Nandalal Bose considered himself to be a painter above all. However, he also worked in many other media, creating architectural works, stage set designs, costume designs and prints. This rare bronze sculpture places emphasis on the rhythmic movement of the figure in the course of her last impassioned dance. The dancer is Srimati, the court performer who sacrificed her life by transforming her dance into a forbidden act of worship of the Buddha. (S.R. Qunitalla, ed., Rhythms of India: The Art of Nandalal Bose, exhibition catalogue, Singapore, 2008, p. 200)


Rabindranath Tagores play was a dramatised version of his own epic poem, Pujarini, which is itself based on a Buddhist tale that forms part of the sacred Pali canon of Avadhan Shatak. The story is about Srimati, a devout Buddhist servant of the royal household, who risks execution to continue her worship of the Buddha. The King had prohibited any kind of worship except that of the Vedas, but she still persists, going against the advice of the queen and other members of the royal household. In the early evening, Srimati places her offerings at the Buddhist stupa near the palace, and as she lights the lamps at the stupa, she is cut down and killed by the royal guards.


Blood smeared the white stone that day. In the clear autumn night, in the quiet and solitary royal garden, the lights of worship at the foot of the Stupa got extinguished forever. (Rabindranath Tagore, The Poet of India, K. Basu Majumdar, New Delhi, 1993, p. 35)
Created By Pundoles